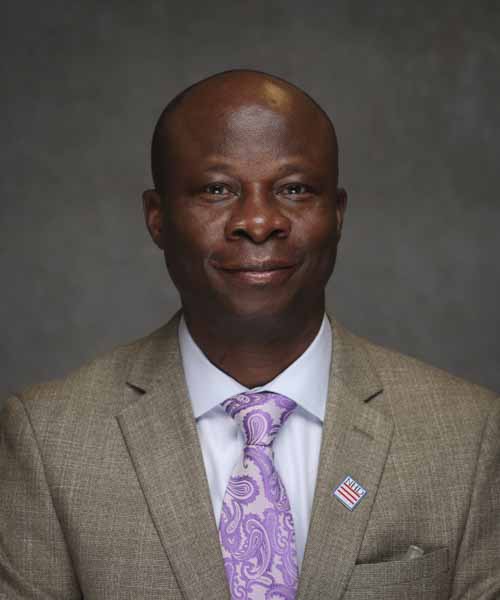 Dr. Bukola Oyeniyi is associate professor of history. His research expertise is on the social and cultural history of Africa, specifically internal migration and human development, social conflicts in composite societies, terrorism, and dress and identity in Yorubaland.

He is the author of Dress in the Making of African Identity: A Social and Cultural History of the Yoruba People and co-author of Africa in Focus: Nigeria.

Dr. Bukola Oyeniyi is historian of African history, with specialization in Africa's social and cultural history in the early nineteenth to the twentieth centuries. His current research focuses on the place of Africa's expressive culture, especially dress in the construction of individual and group identity. In his book, Dress in the Making of African Identity: A Social and Cultural History of the Yoruba People, he examines the history of Yorubaland as seen through dress and the history of Yorùbá dress, especially its place in the construction of Yorùbá ethno-national identity. Yorùbá people, as Oyeniyi argues, conceived dress as an assemblage of modifications and/or supplements to the human body. These included coiffed hair and colored skin, pierced ears and scented breath, etc.

Underlying this conceptualization was the requirement of being an Omoluabi, an ethical category defined as a conglomeration of moral principles such as being lofty in spoken words and respectful, having good mind towards others and being truthful, possessing lofty character and being brave, hardworking and being intelligent, including having a good dress sense. All these formed Yorùbá individual and group identity (Yorùbáness) as well as what Yorùbá dress was all about. To be a Yorùbá man or woman was therefore to dress well and to dress well was to be a Yorùbá man or woman. Understood in this way, Yorùbáness therefore was impossible without Yorùbá dress and Yorùbá dress was impossible without Yorùbáness. His other works on African social history dwells on conflict resolution, terrorism and peace building in Africa.

Nigerian Native, MSU Professor Offers New Way of Understanding Terrorism
KSMU Radio
08/05/2016
Historian Dr. Bukola Oyeniyi asks if what we know about terrorism is the only way to perceive it.